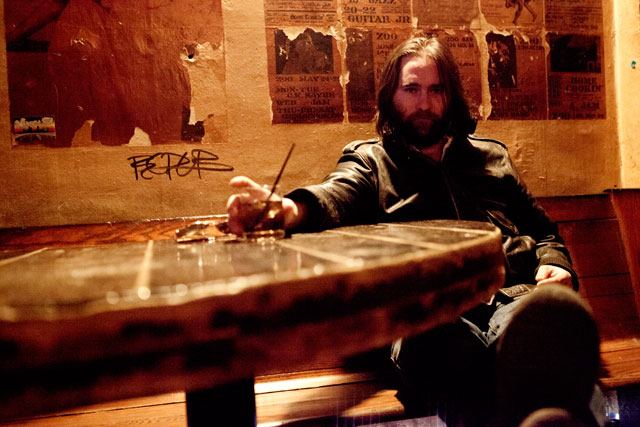 Bonehart Flannigan. There may be no more fitting pseudonym in all the singer-songwriter pen names I’ve heard. First, it sounds a little silly rolling off the tongue, makes you giddy in some way. Same goes for a Bonehart Flannigan performance. While the songs may hurl themselves at heartbreak, murder and destitution, their exuberance and charm matches that of their composer. But back to the name: Bonehart Flannigan. There’s something boisterous about it. What sort of person has that name? Well, it’s whatever piece of Jon Dell writes the rip roaring folk that takes the stage with him at a Bonehart show. Whether it’s a motormouth homage to Dharma, the immortalized van of his other band Universe Contest or the wicked-sharp murder ballad “Mean Blade of Grass,” Bonehart music wears most of its emotions and intentions right there on its happy, dirty sleeve. Whatever the message may be, it’s absolutely exuded by a country rock voice and a speeding acoustic guitar. Life sucks, life is great. Bottoms up!

“The speakers in Bonehart Flannigan songs are always in doorways. They’re either about to be clobbered by the slamming door on their way out, or begging a good woman to be let back in.

The characters are often drunk, often foolish and often have smart mouths. Jon Dell himself (aka Bonehart Flannigan) said of his shows, “My shows are a lot like Christmas. I show up drunk and when I’m done, everyone is mad at me.” 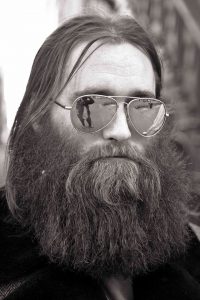 On this night, however, Dell was admittedly cold sober, matching the sharpness of his band, which included his Universe Contest bandmate Brenton Neville on drums, Mark Wolberg on upright bass, Brian Vana on harmonica and Thad Miller on fiddle. Flannigan doesn’t so often play with a full band live, and it made for sneak peek of his upcoming debut album Backpacks and Mason Jars. The two-fifths of Universe Contest beamed when Dell closed the show with “Get in the Van, Let’s Go,” a highway-burning song that chronicles their drunken, knee-slapping touring escapades.

To say that Dell’s endless beard and shoulder-length mane make him look messianic is to parrot YouTube comments about many folk musicians. To say he looks like a cult leader ignores his gregarious stage manner. No, Bonehart Flannigan is the truck driver who saves you from the cult, sings you his sad stories and sends you on your way.

Nobody really “leaves it all on the stage” as the expression goes, but certain artists leave pieces. When Dell sang “Sweet Release” — a song of lost people finding their singular relief in life — the singer raised his voice to levels both thrilling and dangerous. He stretched the larynx to a place that it will literally go a finite number of times. For the Zoo Bar crowd, then, it was a gift and Dell’s own sweet release. We ought to be thankful for it.” –