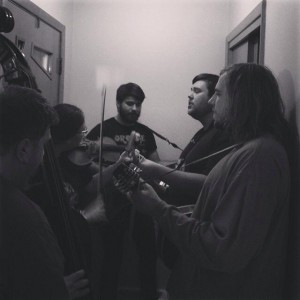 In a broader musical landscape where a wave of bluegrass revivalism is sometimes referred to as “newgrass,” Bud Heavy & the High Lifes are like crab grass. Their brand is a choir of metal and wires — tough, tried and true. With the gritty and joyful bounce of dust bowls and steel driving it’s music that could easily be said to soundtrack an American past.

But they’re also playing it now. It says something if you’ve seen Bud Heavy & the High Lifes live, they don’t dress or talk like extras from O Brother Where Art Thou? or side characters from the The Grapes of Wrath. Their playing of this old-timey music may be preservational by virtue of the fact that they add it to the diverse landscape of Lincoln music in 2013, but there’s no sense of relic fetishism here. If you heard the band the last time they were on KZUM on Soundcheck Nebraska, you heard them burn through 25 minutes of music without much more than a breath.

It might also not surprise you to learn that a good chunk of Bud Heavy come from punk rock backgrounds. It’s in the breakneck launches and landings of the bluegrass you’re about to hear. There’s a pace and tone emanating from Max Morrissey (banjo), Casey Hollingsworth (mandolin), Kenny Kinlund (bass), Emma Nelson (fiddle) and Jeremy Wurst (guitar) that when it’s at its musical height doesn’t seem to pay too much attention to what century its in.