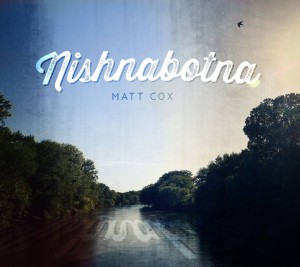 Check out our newest upcoming release from Matt Cox, called ‘Nishnabotna’. It is the fourth studio album from Matt Cox set to be released August 8, 2014 on Sower Records, the first release from Cox in three years. The self-produced album was recorded and mastered at Hidden Tracks Studio/J Garrett Sound Productions over the past year. The album blends the sounds of folk, country, roots and Americana to create the perfect Midwest-influenced record worthy of the campfire and summer road trip.

A five-time Omaha Entertainment & Arts Award winner for Best Country/Americana (2010, 2011, 2012, 2013) and Best Blues (2009) speaks to the caliber of artist Matt Cox and his band have become in the studio and on stage. With a live show that showcases some of the best players in the region, and a raw energy that reveals the passion and experience that friends share with each other on stage and off. Whether you crave the guitar driven jams of the Allman Brothers, the story telling of Dylan, or the country charm of Willie Nelson, The Matt Cox Band is sure to deliver!

Stay tuned for ways to pre-buy this record.